The Philippines can utilize climate change and energy transition financing to ensure a thriving, resilient economy, especially with the Department of Finance at the helm, according to two climate finance experts.

“Climate finance is crucial, but is limited. We need solid plans to maximize every peso that we have for climate action,” said Angelo Kairos Dela Cruz, deputy executive director of the Manila-based international nonprofit Institute for Climate and Sustainable Cities (ICSC), in an online briefing.

Dela Cruz shared the results of the Climate Finance Adaptation Study Report for the Philippines, which shows that USD 770 million (PHP 38.5 billion) or 37 percent can be considered as over-reported from the USD 2.1 billion (PHP 105 billion) of adaptation finance for the country reported by donors across 18 assessed projects from 2013 to 2017.

ICSC, ACCORD, and CARE in the Philippines identified Japan as the country which has most over-reported its climate finance for the Philippines (USD 425 million), followed by the World Bank (USD 156 million), France (USD 98 million), the Asian Infrastructure Investment Bank (USD 54 million), and Korea (USD 32 million). The report also highlights the prevalence of mitigation over adaptation funding, the high potential for inflated adaptation finance figures, and a significant level of inaccuracy in current donor reporting methods. 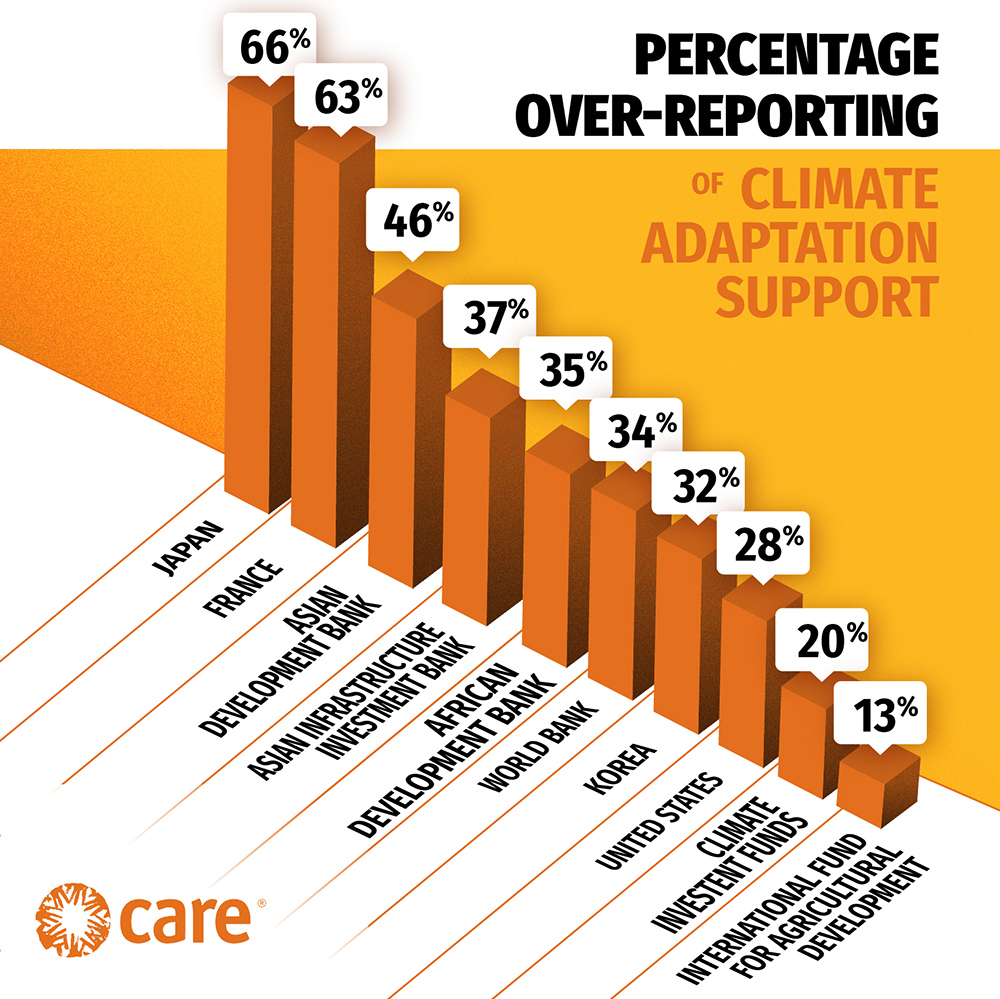 Globally, climate finance from 2013 to 2017 has been over-reported by USD 20 billion, according to the global study released last month by CARE International with ICSC and other groups in Southeast Asia and Africa.

“Accounting for climate finance must be a shared responsibility by both source and recipient countries such as the Philippines. We are happy the Department of Finance is working on the country’s climate finance roadmap while working with the Climate Change Commission to deliver an ambitious Nationally Determined Contribution (NDC) to the Paris Agreement,” Dela Cruz said. “The CCC has also set up its Climate Finance Systems and Services, while the legislature, particularly the House climate committee, is exercising its oversight function and fills a massive gap in the accountability loop.”

However, ICSC noted that the research focused on assessing internationally sourced climate-tagged funds for adaptation, or official development assistance, and that it covers only one side of the overall climate financing ecosystem of the country, excluding national budgetary appropriations.

“We are already seeing leadership from the DOF in climate and disaster risk financing, and policy signals from the Bangko Sentral ng Pilipinas and Securities and Exchange Commission recognizing the materialization of climate physical risk and transition risk. Equally important is to secure optimized concessional support and international capital to achieve climate prosperity by maximizing socio-economic outcomes,” said Sara Jane Ahmed, finance advisor to the secretariat of the Vulnerable 20 Group of Ministers of Finance, which was founded by the Philippine government and currently comprised by the DOF and their counterparts in 47 other developing countries.

Ahmed shared how the NDC can be the floor for climate action while the V20 Climate Prosperity Plan can provide an investment pathway for infrastructure projects and economic programs to accelerate zero-carbon growth, build greater climate resilience and boost socio-economic development.

“What affects V20 countries will increasingly impact the world economy, just as the V20 bears the brunt of the impacts of climate change and concurrent global crises. This is why the V20 also has an Action Agenda with the International Monetary Fund to better consider climate physical and transition risk, and make available special financial assistance for V20 countries in mitigating climate crisis impacts,” she said.