The Institute for Climate and Sustainable Cities (ICSC) together with the Salcedo, Eastern Samar-based women’s group KAKASA Federation organized a learning visit last April 23-24, 2019 among various women’s groups in their province. 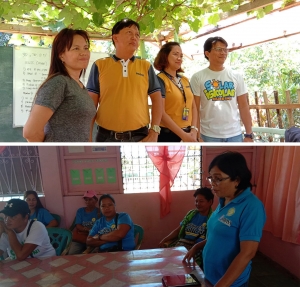 I was one of the attendees together with participants from Sulong Suluan, an all-women group pushing for renewable energy initiatives in their home island of Suluan in Guiuan, another Eastern Samar town. We have been working with Sulong Suluan and other members of the island barangay for some time now through our RE-Charge Pilipinas program.

In this learning visit, our group appreciated even more the importance of honesty, commitment, unity, loyalty, dedication, perseverance, and patience in running our respective organizations. I also learned how to properly reach out and coordinate with local government units and their officials. We need to have a firm and substantial relationship with the local chief executives, as well as various government agencies and non-government organizations who can help facilitate programs and projects.

Alma Latina, president of Sulong Suluan, shared that there were a lot of times when she almost gave up as the leader of the organization. Aside from her limited time given that she already serves as barangay treasurer, she was also having a hard time being the youngest in their group. However, Alma told us she realized that Sulong Suluan and different women’s organizations go through similar struggles, and that some go through even more challenging experiences. She then promised to never leave behind the organization, and said that whatever challenge comes their way, Sulong Suluan will strive to grow and flourish collectively.

The participants enjoyed the visit in Barangay Caridad the most because they discovered that the Caridad Women’s Association is not livelihood-based. This group is advocating for environmental conservation, particularly mangrove reservation. The group was able to establish a boardwalk and plant seeds and mangroves in Bakhawan Eco-Park as part of their project. The view was spectacular!

Through these activities, I realized how commitment, communication and understanding are key factors to success. I also witnessed different approaches in running an organization – there are groups that need to properly set and strictly implement rules while other groups reorganized their systems.

Overall, my colleague Orland and I consider this learning visit successful based on the feedback of the participants. Although only seven members of Sulong Suluan were able to attend, they committed to share their learnings and insights to the other members.

Thank you, ICSC, for giving me an opportunity to take part in an informative and meaningful learning visit with the Sulong Suluan women’s association.

Kenneth Lopez is the facility administrator of RE-Charge Pilipinas, which was established in Tacloban by ICSC in the aftermath of super typhoon Haiyan. The initiative continues to demonstrate renewable energy innovations as their contribution to overall efforts of achieving climate resiliency and community-driven paths towards low-carbon development in the Philippines.

THE LATEST FROM ICSC