Mobility, a feature of democracy? But 88% of Metro Manila is at the losing end

The world marks the International Day of Democracy every 15th of September. The United Nations has renewed calls for states to respect and protect human rights as the world responds to challenges posed by the COVID-19 pandemic. It is a great day to think about mobility, one of the most essential yet neglected features of modern society.

Broadly speaking, we can consider mobility as the ability of citizens to safely move or travel with ease and comfort in the country. It is about freedom of movement and as a right it is enshrined in our Constitution and should be enjoyed by all, in particular the great majority of our population, who happen to be commuters.

Google’s community mobility reports suggest that since the start of community quarantine restrictions in mid-March, the movement of people nationwide within public transit hubs, such as MRT and LRT stations or bus and jeepney terminals, declined by as much as 85% in late April. The latest report dated September 8 shows a 57% decline in transit station mobility nationwide, with a 67% decline in Metro Manila alone, compared to the end of July. This is more than just worrisome.

Restrictions imposed on public transportation imposes a heavy strain on the 88% of households in Metro Manila and the Greater Manila Area who do not own cars and who are largely dependent on public transport to earn a living. When even essential workers and pandemic frontliners have had to cope with walking or cycling, two often overlooked and undervalued modes of mobility, we know we are in trouble. But it does not have to be so, especially when we look at the challenge from the point of view of basic freedoms.

One of the indications of a healthy, functioning democracy is the way the welfare of the majority takes precedence over the interest of a few. If so, it seems our streets and roads have become daily manifestations of inequality and exclusion.

We only have to look at EDSA and the number of lanes occupied by private cars compared to the narrow side strip demarcated as bicycle lanes. Designated bike lanes are also continuously hampered by parked cars. Cyclists are constantly harassed almost as if they should remain on the gutters—as if they do not have an equal right to the road as a piece of public commons.

The same goes for pedestrians who are forced to navigate constricted sidewalks often packed with parked cars and posts, restricting the access of those who need safe passage most – children, pregnant women, the elderly and people with disabilities. Clearly, it is the interests of the 12% minority that have prevailed. 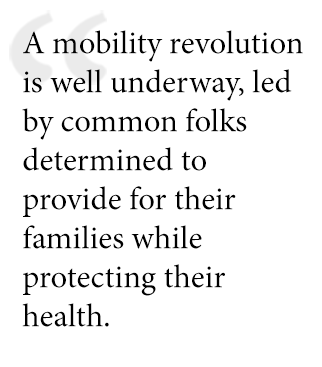 Is the majority invisible? Invisibility takes different forms. A count of cars and motor vehicles is available, yet until last May, the number of pedestrians and cyclists who use our streets and roads has been virtually unknown. This is why the Metropolitan Manila Development Authority or MMDA’s Bike Program initiative to count cyclists on major intersections in Metro Manila is a bold step in the right direction. To be effective, however, the count needs to be sustained, improved, supported and expanded.

The initial count shows an immense array of possibilities. For starters, even MMDA officials consider the numbers are likely an underestimate. What might be the picture when we begin counting regularly? And when we extend the count to arterial roads and side streets? We shouldn’t be surprised to see the ultimate picture: a mobility revolution is well underway, led by common folks determined to provide for their families while protecting their health and the well-being of others.

Studies in other countries have shown how cycling and walking have improved local business. This indicates opportunities for Philippine cities. By making urban areas more bicycle- and pedestrian-friendly, chief executives can revitalize local economies recovering from the pandemic while streets, communities and neighborhoods come alive—because the focus will be on people, not cars.

On September 22, we intend to honor businesses and leaders taking decisive steps to uphold democracy in the country by championing active, inclusive mobility and by promoting cycling as a mainstream mode of transportation.

The Institute for Climate and Sustainable Cities, MNL Moves, The Climate Reality Project Philippines, and 350 Pilipinas will launch the Mobility Awards through the website mobilityawards.ph. The awards are meant to recognize leadership and to provide the public an opportunity to reward work places, commercial establishments and local governments that are enabling cycling as an inclusive mode of transport. The Mobility Awards are also meant to challenge laggards to keep up.

We encourage citizens to help identify and provide evidence to support—or challenge—local governments, workplaces and commercial establishments based on their promotion of cycling and active mobility in general. Because by acting together, we can do more for the mobility needs of the 88% of Metro Manila amid and even beyond the pandemic. Certainly, the 88% deserve far more than the ridiculously narrow strip of the commons they have been offered thus far.

Maria Golda Hilario leads the urban transitions work of the Institute for Climate and Sustainable Cities as its associate for program development.

Author’s Note: The Mobility Awards is our modest contribution to helping the government develop and evolve more inclusive cities where the majority can live and thrive safely and with joy. Join us.