Gigie Cruz, text and photos, with a report by Red Constantino
Originally published in ABS-CBN News.com 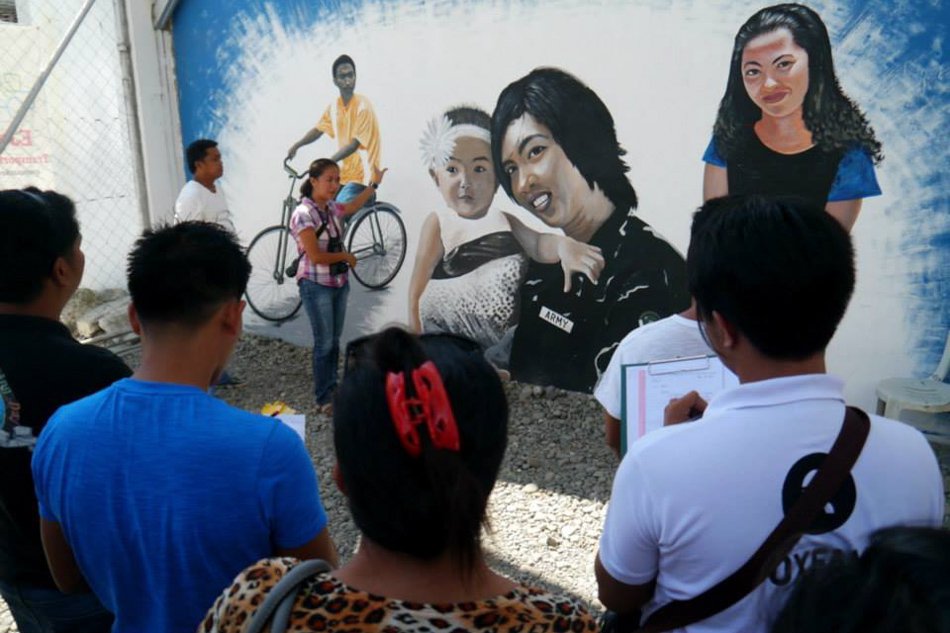 The air was thick with the sense of anxiety as Corporal Annjannette Donato Obligado, while on duty at the Armed Forces of the Philippines General Headquarters, and her husband PO2 Oliver Obligado, who was also based in Manila with the Philippine National Police, monitored news on Super Typhoon Yolanda on November 8, 2013. She had family in Eastern Samar while the kin of her husband lived in Tacloban City. 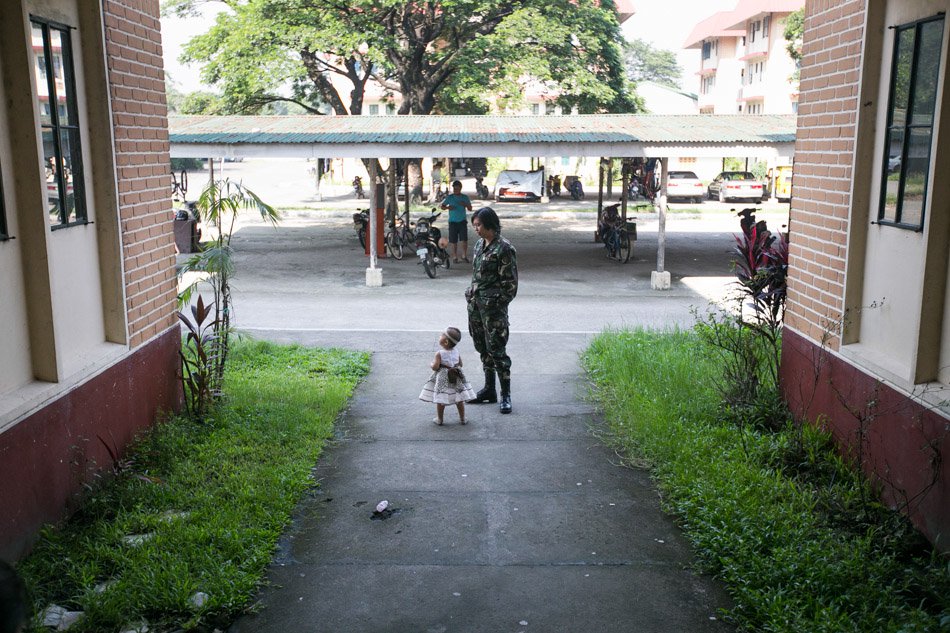 Obligado, with her own daughter Mary Olive, in their residence in Camp Aguinaldo. Photo by Gigie Cruz

After learning about the severity of Yolanda’s impact, the couple immediately took the first available flight onboard the AFP C-130 that could accommodate them two days later, on November 10, to bring basic supplies to their respective families.

Comforted by the fact that their family survived unscathed, the couple decided to return to Manila the following day having left their three-month old daughter with her nanny. 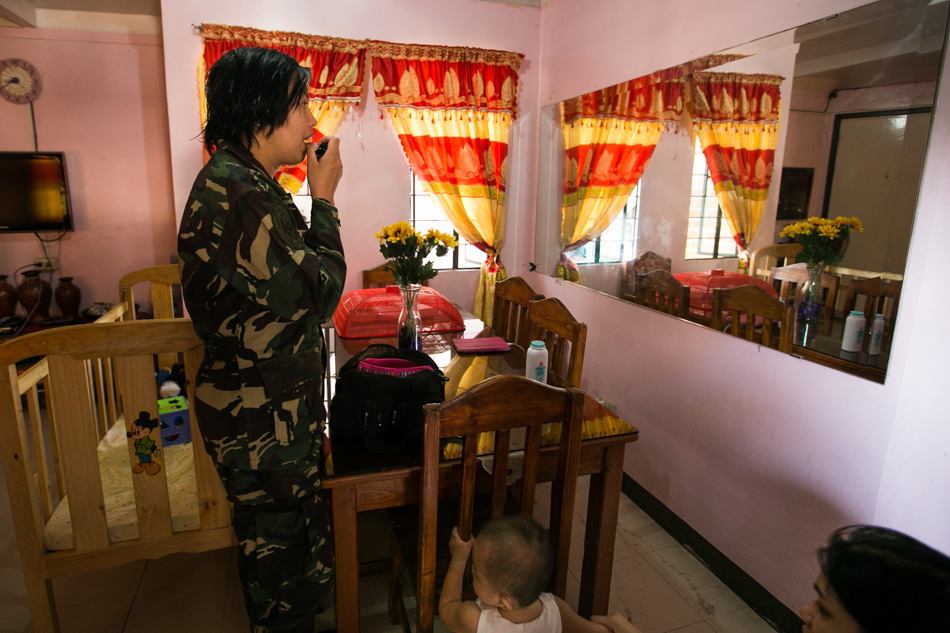 Obligado juggles her time between her work and being a responsible mother to Mary Olive. Photo by Gigie Cruz

The next morning, the queue at the airport was unimaginable as thousands were trying to flee the deteriorating city. While waiting for their turn, the couple had to assist a woman who nearly fainted and brought her to the makeshift clinic at the airport.

Amid the debris at the makeshift hospital, Obligado found a woman draped with a bloodstained blanket lying with her newborn child. That scene brought her back to her own birthing experience and she was reminded of her child. She initially offered the new mom a clean blanket and a pack of biscuits. With little else to offer, the AFP soldier left her rosary and offered to breastfeed the ailing mother’s infant. Holding back her tears, Obligado carried the baby towards her bosom, a deed to this day she refuses to consider heroic – a mere natural instinct every mother would feel to feed a hungry child. 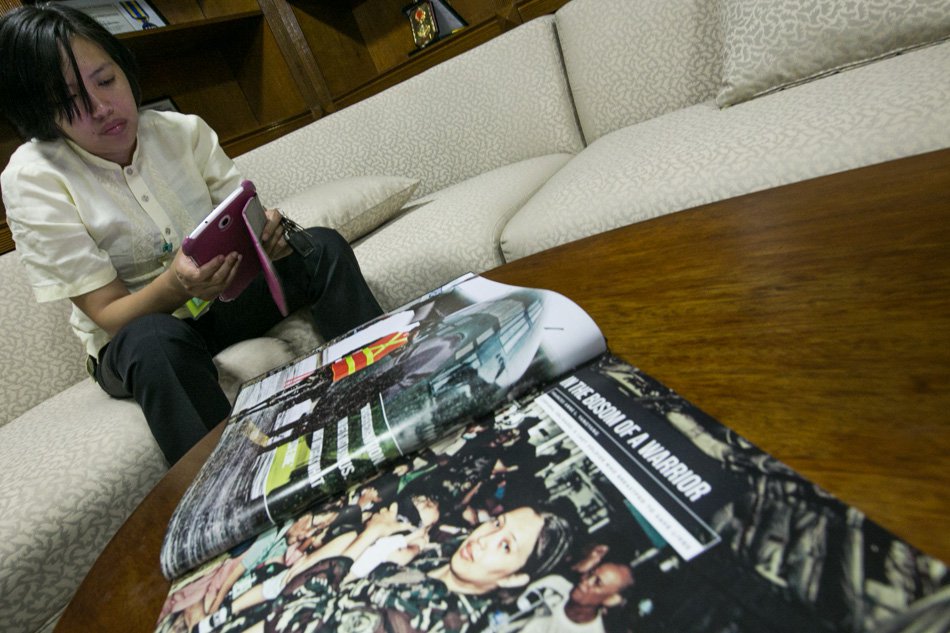 Obligado shows an article in the book “The AFP in Challenging Times: Defending the Nation, Serving the Filipino,” published by the Armed Forces of the Philippines, where she is recognized for her heroic act of breastfeeding babies in Tacloban when Yolanda struck in November 2013. Photo by Gigie Cruz

Onboard their flight back to Manila, Obligado carefully watched an old man with a restless boy. Seeing the old man holding a dirty baby bottle containing yellowish-colored water prompted her to approach the old man and offered to breastfeed the child. The boy fell asleep as he fed on Obligado’s milk.

This was followed by another opportunity to breastfeed a family friend’s child on their next visit to Tacloban. The baby’s parents had a hard time looking for formula milk when most of the commercial establishments in the city remained shut.

Obligado relishes her time with Mary Olive, a motherly instinct that helped her react to the situation during Yolanda. Photo by Gigie Cruz

When photos of Obligado breastfeeding a baby in Tacloban went viral in social media, the public gained a bit more awareness of the particular difficulties mothers experience during disasters. This gave rise to other initiatives, such as Nanay Bayanihan, which focused on the welfare of mothers, specifically moms nursing infants, by providing psychological and emotional support during times of crisis, giving them breastfeeding guidance and assisting affected families with necessities such as food, water and clothing.

That photo of Obligado became part of a mural of heroes at the Institute for Climate and Sustainable Cities (iCSC). The institute runs a solar and sustainable services training facility in downtown Tacloban. The training facility is part of iCSC’s campaign to promote the use of renewable energy for better development and climate resilience in the aftermath of the devastation of Yolanda. 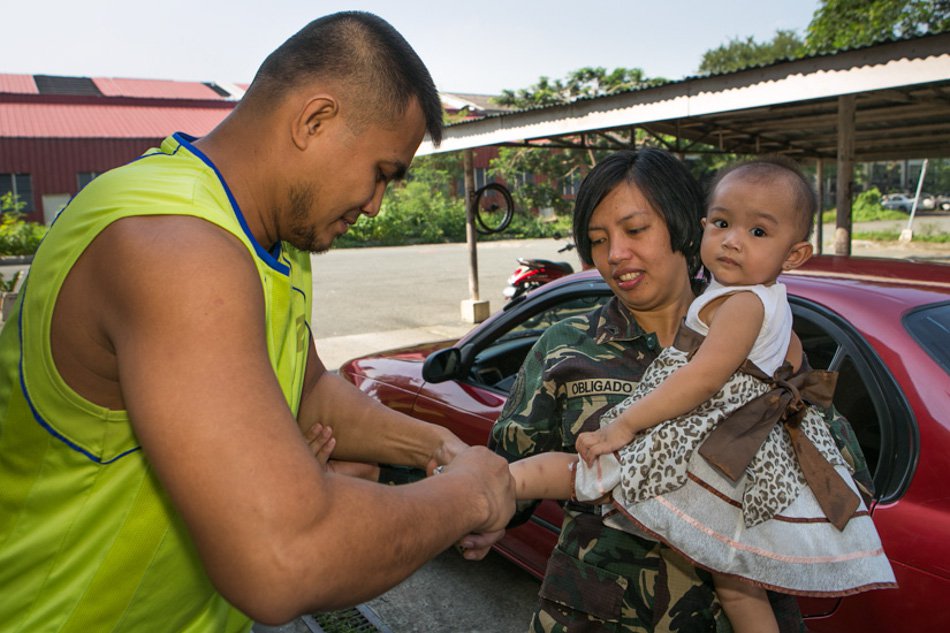 Obligado shares parenting duties with husband Oliver, who is also a serviceman with the Philippine National Police. Photo by Gigie Cruz

Barely a day after the course’s conclusion, beneficiaries from San Vicente, a remote town in Northern Samar, operated their TekPak to provide light and power fans for medical personnel who successfully delivered two healthy babies.

While people refer to Obligado’s act of kindness as an act of heroism, she dismisses the title and insists it was her duty as a soldier and a mother.

“Whatever recognition you get is just a bonus. What matters is what you’ve done,” she said. 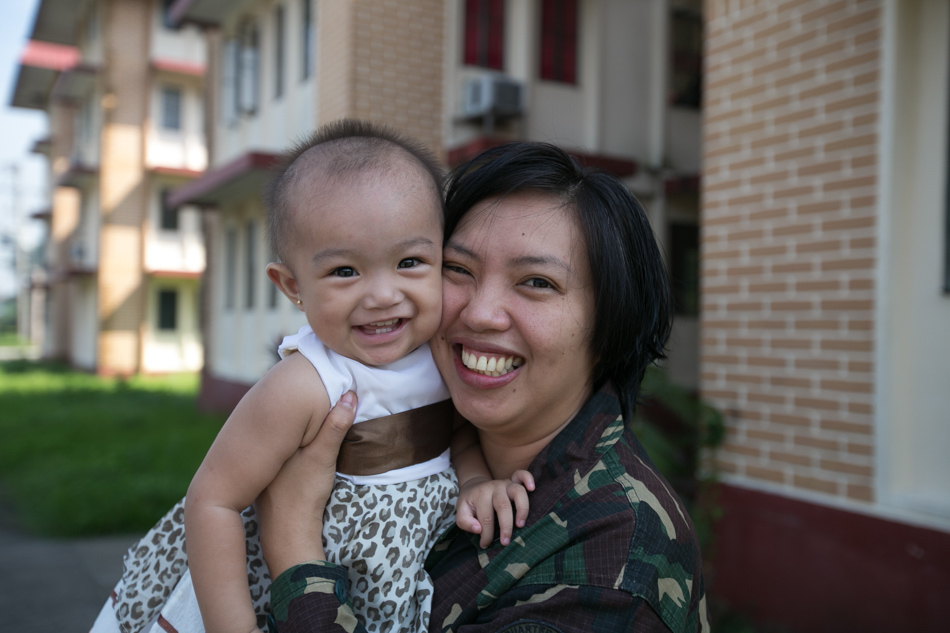 Obligado and Mary Olive pose outside their residence in Camp Aguinaldo. Photo by Gigie Cruz

Similarly, some have called iCSC’s mission in Eastern Visayas as short of heroic, but iCSC executive director Renato Redentor Constantino simply puts it as a natural reaction “to do something for Tacloban, anything to help it rise out of the rubble,” and what better way to do it than teach the people in the use of renewable energy as “part of the mission to build back better and promote climate resiliency.”

It is thus no coincidence that Obligado’s photograph ended up on the walls of one of iCSC’s projects, RE-Charge Tacloban, as a permanent tribute to some of Yolanda’s unsung heroes.

Her image is joined by that of Lottie Salarda, who who kept on doing her job as a readio reporter while the storm surged smashed into the city, surviving only by clinging to an iron bar as the flood rose violently; and that of Joaquin Corrigidor, who helped countless strangers search for their missing family members, only to find out his father did not survive the disaster.

Obligado and the rest of the heroes are on the walls of the RE-Charge Tacloban to constantly provide them the inspiration that the seeds of building back better lie in such simple acts of kindness and heroism. 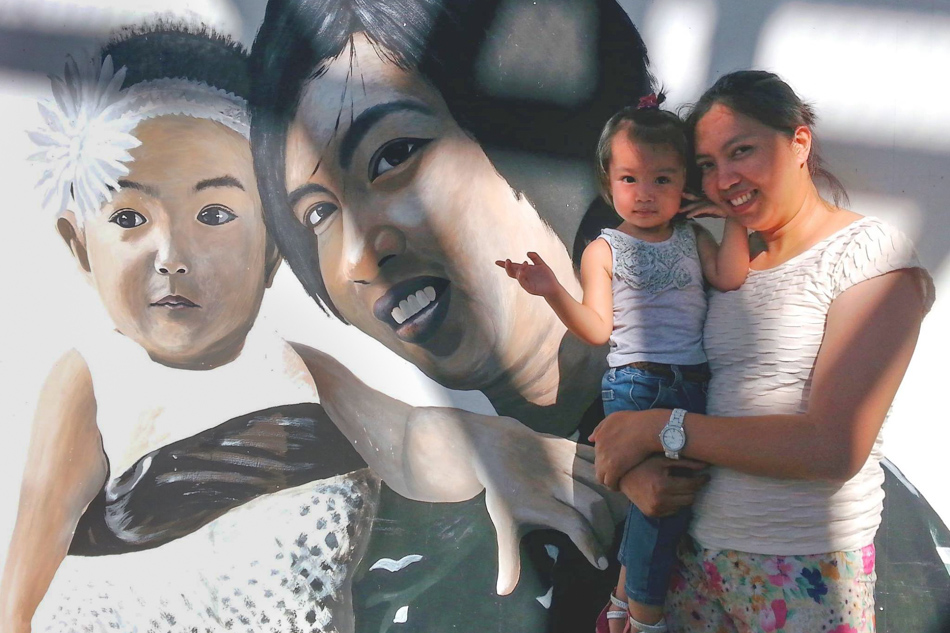 Obligado and Mary Olive pose in front of the heroes’ mural at the ICSC headquarters in Tacloban City. Photo courtesy of ICSC