Five years after Haiyan, survivors light the way for the rest of the country – and the world

Today, we remember the over 7,000 people whose lives were lost.

We also remember how countless lives and communities were forever changed by the super typhoon. Too often, we gloss over the devastations left by disasters and get overwhelmed by the enormous challenge of recovering and rebuilding.

But millions of Haiyan survivors remind us, today and every day, that beyond falling victim to the super typhoon, they are doing what they can to not only survive but even thrive in the midst of adversity.

Today, we honor the small, off-grid community of Sulu-an Island in Guiuan, Eastern Samar – the first community hit by Typhoon Haiyan – is beckoning aspirations for a community that will be energized by the powers of the sun and the wind. 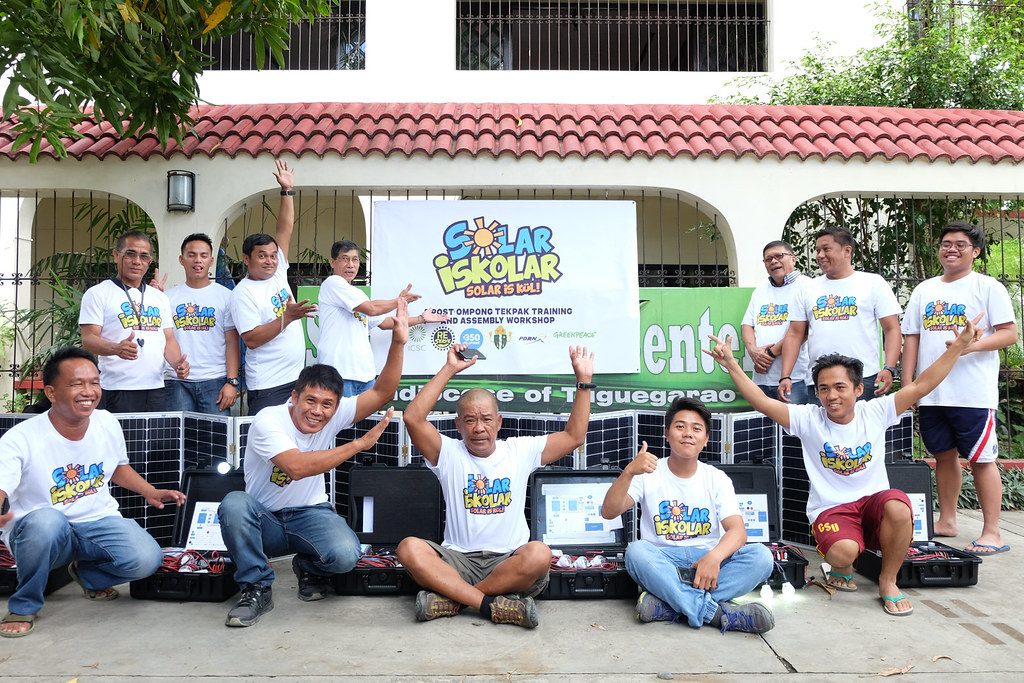 It is the local women’s group Sulong Sulu-an (Forward Sulu-an) holding Zumba dance classes with the help of solar-powered speakers, baking bread under solar-powered lights, going door-to-door asking neighbors how much energy do they need to power their households and island barangay, and setting up their own solar home systems that show us what climate resiliency truly means.

Guiuan’s Bantay Dagat (Sea Patrol) is constructing a solar-powered guardhouse to protect its marine reserves, which are showing signs of recovery from the devastation of the typhoon. It is their townsfolk rediscovering all the ways to cook and eat their indigenous rootcrop, the palawan, which they found to be a reliable substitute for rice especially in the aftermath of Haiyan.

We also honor today 300 Solar Scholars mostly from Haiyan-affected areas – Samar, Leyte, Eastern Samar, and Iloilo – as well as communities from Rizal, Laguna, and Cagayan who have also been affected by other typhoons. They are ordinary citizens – nanays, ates, titas, lolas, kuyas, titos – as well as community leaders, local government officials, and local development workers who are now integrating community disaster preparedness and response interventions with renewable energy solutions.

Having experienced firsthand how difficult it is to seek outside help without electricity, the Solar Scholars learned how to power their community command posts, evacuation centers, and health centers with TekPaks, portable solar-powered devices designed and built by Haiyan survivors, to provide immediate light and charging needs in times of emergencies.

Today is also a day to honor the members of the RE-Serve Humanitarian Corps, a volunteer group mostly composed of Haiyan survivors who are trained to provide solar power to humanitarian and emergency responders.

Together, the Solar Scholars and members of the RE-Serve Humanitarian Corps are lighting the way in harnessing renewable energy not just for emergency response but for their communities’ development. They continue to pay it forward by training other people affected by typhoons or dealing with the lack of electricity in their own communities.

Recently, twenty participants from Marabut, Samar and Tacloban were trained as Solar Scholars by a pool of women from the RE-Serve Corps and former Solar Scholar graduates. This latest batch of Solar Scholars, most of whom are also women, led the evacuation drill of the coastal town of Marabut two weeks ago.

“Women have an important role in lighting up our homes and our communities. We have proven in our organization that solar power is useful not only in times of disasters like Yolanda but even in everyday life,” said Lorna Ortilla dela Peña, president of the Marabut Women’s Federation. A previous Solar Scholar trainee, she was one of the facilitators of the latest Solar Scholars training.

“Houses in upland areas with no electricity still heavily rely on their solar lamps, and everyone uses them during brownouts. I wanted to learn more about solar power to help people in my community and I am glad to pass on my knowledge to other women,” she added.

“As a survivor of Super Typhoon Yolanda, I was prepared to help survivors of Ompong… I thought at first that they would be more prepared than us because they experienced Typhoon Lawin just two years ago,” according to Glinly Alvero, a RE-Serve Humanitarian Corps volunteer and ICSC technical officer.

“But some areas lacked the basic preparations and knowledge regarding disaster response. I am quite saddened because this means that the whole country is still ill prepared,” he added, while lamenting the limited options for communities affected by Mangkhut.

The people of Suluan, Nanay Lorna, Glinly, and several other Haiyan survivors whom we have had the privilege of knowing and working with are fully aware that they remain vulnerable not just to extreme weather events such as Haiyan but also to the creeping impacts of climate change such as increasing temperatures, sea level rise, and ocean acidification.

“Even if no one talks about climate change we feel its effects here,” said Jocelyn Naing, a barangay health worker from Suluan. “This summer the water in the well tasted like the sea,” Socorro Quiminales, a mother also from Suluan, told us.

Rene Basilenes, a fisherfolk from Suluan, told us it was harder to catch fish nowadays unlike in previous years. His fellow fisherfolk Virgilio Loyola said he has noticed how the seawaters inch ever closer to their homes.

Today, we honor their and other survivors’ grit, resilience, and generosity of spirit. We honor their will to survive and thrive on the frontlines of a warming world.

Today, we recommit ourselves to helping communities like theirs adapt to the impacts of climate change and transition to cleaner and more reliable energy.